During the Elizabethan era, the seas were ruled by Sir Francis Drake, John Hawkins and others. Elizabeth subsidized voyages to seize Spanish ships, and was rewarded by a share of the booty (although her diplomacy required that she deplore such activities to ambassadors of other countries). The hey-day of piracy as we think of it was during the 1700’s in the Caribbean and was dominated by Blackbeard (Edward Teach), Henry Morgan, Jean Lafitte. It was largely suppressed by English and American navies by Jane Austen’s time.

The Barbary pirates, also known as corsairs, were very active during the Georgian era. They were based in northern coast of Africa, in Morocco, Algiers, Tunis and Tripoli. These were separate nations but all were ruled by the Ottoman Empire. They plundered ships in Mediterranean, and frequented the Adriatic and the seas around Ireland and Iceland. They were known for holding people of means or status for ransom, and for taking slaves as well as merchandise. (They needed roughly 200 men per ship to man the oars of their galleys.) They favoured galleys which were fast and easy to manoeuver in shallow waters; they also liked to disguise themselves as merchant ships. The Barbary pirates were active during the Regency era (they were not completely suppressed until the Victorian era). Byron’s poem “The Corsair” was a romance inspired by them.

Privateers were privately owned ships whose owners had letters of marque from their own government authorizing seizure of enemy ships, especially trade ships. There was a very thin line between privateers and pirates: many privateers exceeded their license, and one king’s privateer was another’s pirate. Privateers were still present during the Regency era and eers usually held no scruples about exceeding their letters of marque if profit ensued. An interesting side note: by the Regency era, pirates wore what normal gentlemen did: boots, trousers or breeches, shirts with stocks and coats.

European privateers were drawn to the Barbary Coast, bringing their wooden ships (or the knowledge of how to build them)-these ships needed fewer men to man the oars, were faster, and allowed for more men at arms on board. By Jane Austen’s time, the Barbary Pirates had negotiated “treaties” with European states, which involved payment of protection money. While America was protected by Britain, those protections applied to American shipping but after the Revolution, those protections no longer held. American merchant ships were captured, and their crews held as slaves, while the pirates demanded ransoms the new nation could not pay. Negotiations were extraordinarily complex, and winning an agreement with one Barbary nation did not ensure that the others (or the one who signed it) would honour it. Many prisoners died in captivity; some were held as slaves for many years. In 1801, Thomas Jefferson declared war on the Barbary Pirates and, after numerous setbacks, finally won in Tripoli (hence “…the shores of Tripoli…” in the Marines’ Hymn).

When captured alive, pirates were taken to London, where they usually were held in Marshalsea Prison, and, if convicted in the Admiralty Court, transported to Wapping to be executed at Execution Dock on the banks of the Thames, which was symbolic of the seas where their crimes were committed. They were known as enemies of all mankind, and were usually considered guilty before ever facing a trial. Execution was by hanging (with a short rope that resulted in strangulation instead of a cleanly-broken neck) and bodies were left hanging for 3 days or longer, to serve as a deterrent (with indifferent success, it must be said). The last execution of this nature occurred in 1830.

While researching my 17th century historical novel, Stolen, in which a young woman’s parents are kidnapped by Barbary corsairs and taken to the slave markets in Morocco, I came across several blogs where people questioned whether such raids had ever really occurred. They were especially doubtful that white women ended up in Northern African harems.

Certainly, in popular culture, the possibility was too tantalizing to pass up. Many of us have heard of the somewhat notorious Angélique and the Sultan by Sergeanne Golon, in which a 17th-century French noblewoman is captured by pirates and sold into the harem of the King of Morocco. She stabs him when he tries to have sex with her, and stages a daring escape.

No wonder people started to wonder if there was nothing more to these ‘white women in the harem’ stories than the fevered imaginations of Western men!
But the scenario also shows up in more serious Western art. For instance, in Mozart’s opera The Abduction from the Seraglio a Spanish man tries to rescue his beloved from the harem of the Sultan Selim, where he believes she has been sold by pirates; in Voltaire’s Candide, an old woman tells of being sold into harems across the Ottoman Empire.

As I delved further, I found what seemed to be legitimate historical records of such abductions. One that stood out was the story of Helen Gloag, a young Scottish woman with red hair and green eyes, who, at nineteen was kidnapped at sea by Barbary pirates, and sold in the slave markets to a wealthy Moroccan who ‘gifted’ her to the sultan. She lived in his harem, and ultimately became his fourth wife, mother of two of his sons, and Empress of Morocco.

Even though Gloag was able to write home, and was visited in Morocco by her brother, thus seeming indisputably ‘legit’, I still came across a piece in Scotland Magazine that mentioned doubts over the story’s veracity. However, as one of Helen’s direct descendants stated in the same article, “Why would anyone make all that up? The voyage is accurate. It is well known that piracy off the Moroccan coast was prevalent at that time.”
Why, indeed?

In Christian Slaves, Muslim Masters, Prof. Robert Davis writes, “The pasha … bought most female captives, some of whom were taken into his harem, where they lived out their days in captivity. The majority, however, were purchased for their ransom value; while awaiting their release, they worked in the palace as harem attendants.”
In White Gold, the Extraordinary Story of Thomas Pellow and North Africa’s One Million European Slaves Giles Milton writes, “Capturing large numbers of white slaves was part of a strategy to gain leverage over ‘the great powers of Christendom’. English females, it seems, were sometimes ransomed for more than £1,000.” And others, he maintains, were taken into harems.

The more I read, the more it seemed incontrovertible that white women did end up in harems. I wanted to include this in Stolen, but in the least sensational manner possible, one which would not make the world of Morocco and the harem seem ‘things apart’ from the Western experience, impossibly ‘exotic’, incomprehensible — and titillating. It was a challenge with such dramatic material. In an early part of the book, I show a European man keeping an Englishwoman in seclusion, and using seductive techniques in an attempt to control her. True, he has had experiences in North Africa that influenced him, but I hoped to reduce the ‘distancing’ factor by setting this part of Stolen in England. It is an approach I used throughout the book, so that slavery in all its forms, including in the harem, could be seen to be endemic to the human race as a whole, not one specific nation or people.

I also tried to tell a roaring good story, and I hope readers find that I succeeded.

A little about Sheila:

Sheila Dalton has published novels and poetry for adults, and picture books for children. Her YA mystery, Trial by Fire, from Napoleon Press, was shortlisted for the Crime Writers of Canada Arthur Ellis Award. Her literary mystery, The Girl in the Box, published by Dundurn Press, reached the semi-finals in the Amazon Breakthrough Novel Award Contest, and was voted a Giller People’s Choice Top Ten. Stolen is her first book of historical fiction.
Visit Sheila’s website at http://www.sheiladalton.weebly.com
Read about STOLEN…
“> 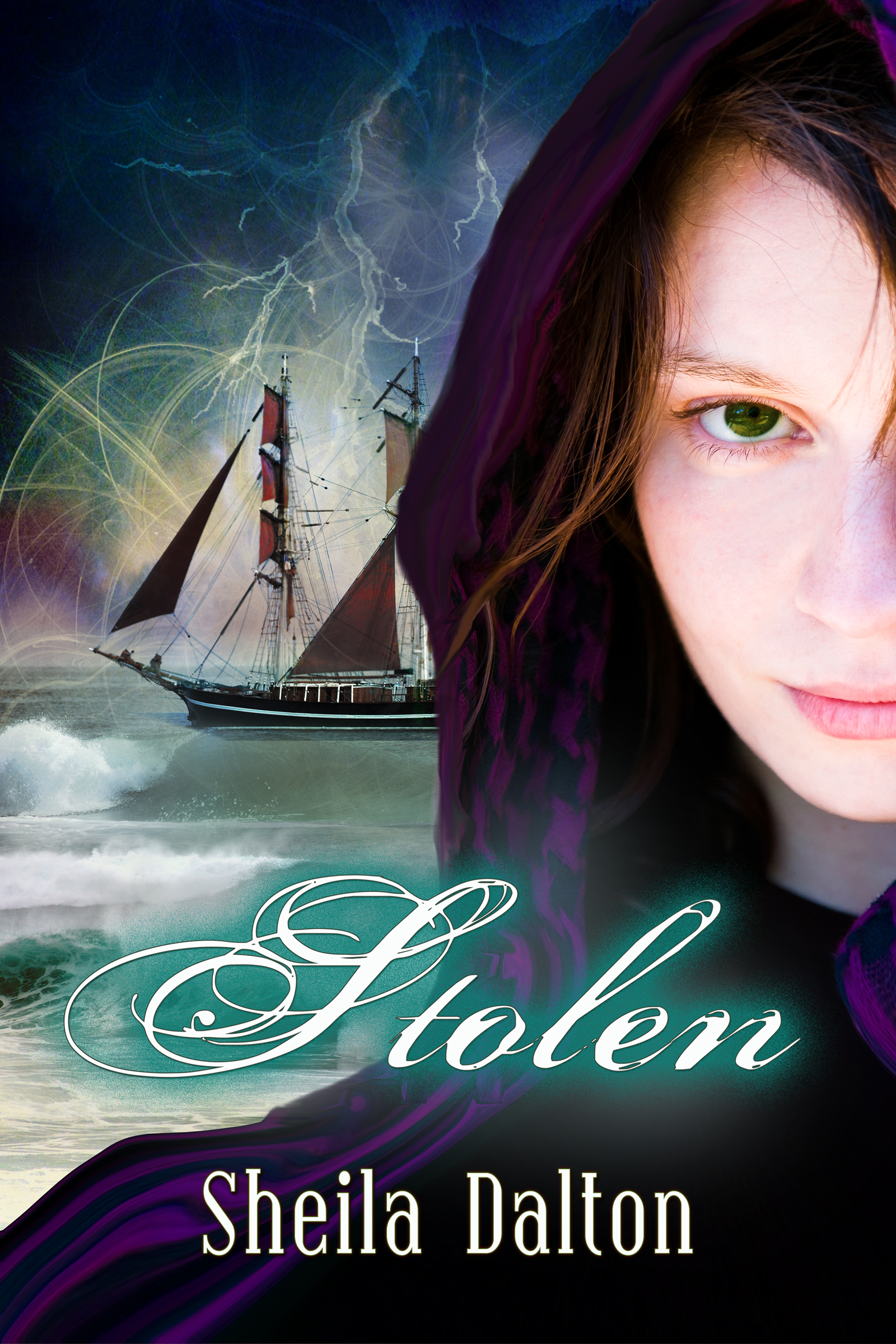 Devon, England, 1633: Lizbet Warren’s parents are captured by Barbary Corsairs and carried off to the slave markets in Morocco. Desperate to help them, Lizbet sets out for London with Elinor from the Workhouse for Abandoned and Unwanted Children, the only other survivor of the raid. The unlikely pair are soon separated, and Lizbet is arrested for vagrancy. Rescued from a public whipping by a mysterious French privateer, she is taken to his Manor House in Dorchester, where he keeps her under lock and key. Later, Lizbet is captured at sea by the pirate Gentleman Jake, and forced to join his crew. Her quest leads her to the fabled courts and harems of Morocco and the tropical paradise of Barbados.
Based on true events, Stolen is the story of a brave but very human young woman who perseveres in the face of incredible odds to establish her place in a new world.

Now that spring is here, it’s time to entertain! This week, author Sheila Dalton will be presenting a fascinating article on this blog site. She is the author of a historical novel STOLEN and non-fiction works as well. Please watch for her post! Her book is available on Amazon.com if you’d like to take a peek.