Recently, I posted about my secret fondness for fruitcake, and my intention to make one this year. Well, I did it, and it was a success! I went through several cookbooks, searched on-line for a recipe, and finally selected Alton Brown’s Free Range Fruitcake (find it HERE: http://www.foodnetwork.com/recipes/alton-brown/free-range-fruitcake-recipe/index.html). I did not follow it exactly (some differences in the fruit used, the liquid used to soak the fruit, and the nuts) but the method worked extremely well, and the fruitcake is delicious! Moist, dense, spicy, packed with fruit and nuts. My husband, who ducks and runs when fruitcake is mentioned, tasted it and liked it. (He ate the whole slice!) Here it is: 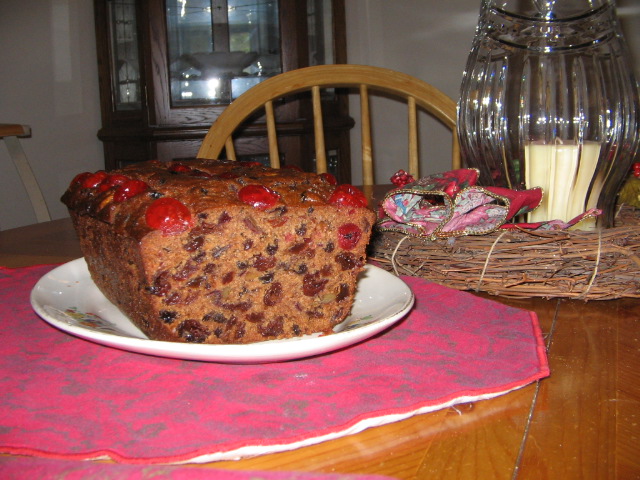 I’m so glad I made this cake, and plan to make it again. Not only is it delicious, but it’s part of a tradition going back hundreds of years. From Eliza Smith’s “Plumb Cake” in The Compleat Housewife and Hannah Glasses “Rich Cake” in The Art of Cookery Made Plain and Easy to fruitcake of today, the ingredients and methods are strikingly similar. Baking from scratch is a special pleasure, one I had almost forgotten as I do it so seldom. Friends and family, who knows what may be in that Christmas gift next year? Just taste it before you make that face – I promise you’ll be pleasantly surprised!

I was at the grocery store today, and found myself picking up containers of raisins and currents. I looked for dried cherries, but will have to look elsewhere for those, and a few other items. With Thanksgiving and Christmas fast approaching, I have found my mind drifting toward … fruitcake.

Dare I confess? I really like fruitcake. Unfortunately, I rarely get to indulge because few people of my acquaintance will have a fruitcake anywhere in sight. If the subject comes up, it is met with either groans, laughter or (worst of all) the eyebrow lifted in disdain. Somehow, though, there is something about a cake full of dried fruits, nuts and spices that I really like (especially if a little good rum or brandy is introduced along the way).

Fruitcake of one kind or another has been around since the Romans. In my Georgian-era cook books, I’ve found a couple of recipes for different cakes with currants. However, my Fanny Farmer edition of 1896, and my great-grandmother’s 1894 copy of THE FAVORITE COOK BOOK have lots of recipes for fruitcakes of all descriptions. Apparently fruitcake was a specialty treat in the Georgian era and really came into its own in the Victorian era. They were a true special occasion cake, and were often used for wedding cakes. In fact, Fiona Cairns made a huge, tiered fruitcake for Prince William and Catherine Middleton’s wedding cake (see it here http://www.dailymail.co.uk/news/article-1381944/Royal-Wedding-cake-Kate-Middleton-requested-8-tiers-decorated-900-flowers.html). Every culture seems to have some version of a fruitcake or fruit bread. There is no clear indicator of when or why it became limited to a primarily Christmas dish, but that seems to be the tradition today.

When I was a child, I can remember fruitcake being a holiday staple, always around but more of a grown-up treat (thanks to the alcohol addition!). Unfortunately, by the time I was old enough to appreciate it, it had become a mass-produced block and was considered unnecessary at best.

For the last several years, I have considered digging out a recipe and making one. Some of the recipes are quite complex and time-consuming. A few items like the candied citron and the neon-green candied cherries will definitely not be included. However, this may just be the year I go for it. I’ve already made a start on getting the ingredients together. Who knows, a home-made-from-scratch fruitcake might find a welcome this year!

It is Christmas Eve.  All the decorating is done, presents wrapped and shipped.  Now it is time to  let the holiday soak into us.  Time to look around and enjoy our family and friends, to enjoy traditions we cherish and maybe to start new traditions, too.  Special food and drink to enjoy-so many of us have those secret recipes we only serve for the most special occasions, like Christmas.  The matter of faith.  There is something special and magical about this time of year.  Even when there is stress or strain, there is still a glow.  The ideals of peace on earth and goodwill to men resonate now as much as ever.   At Christmas, all good things seem possible.

I would like to take this opportunity to wish you and yours a Merry Christmas!  Thank you for reading-I appreciate it so very much.  I hope this is a warm and wonderful holiday for you all.

Now that the decorating is finished, and the gifts are wrapped and shipped, it’s time to start thinking about Christmas dinner (if you haven’t already!)  We will be celebrating with dear friends, and I will be taking a particularly decadent vegetable dish, with parsnips, cream and rosemary.  For many of us, the main course will be the traditional favorites: turkey, ham, roast beef, possibly even roast goose.  Stuffing (or dressing, if you prefer) will also be present in some form.  The desserts are usually fairly traditional as well: various pies and cakes, sometimes a version of the old-fashioned Christmas pudding.   It was the parsnips that got me thinking…

What would have been served at a Christmas dinner in late 18th century, early 19th century England?  What might Jane Austen have eaten?  As always, when confronted with a culinary question, I turned to old cookbooks.  In my facsimile copy of THE COMPLEAT HOUSEWIFE by Eliza Smith, she helpfully included diagrammed dinner services for summer and winter, showing two courses.  The first winter course includes a giblet pie, roast beef with horseradish and pickles and a boiled pudding; the second features a roasted turkey and an apple pie.  Unfortunately, Mrs. Smith did not include vegetable suggestions.

I turned to another old friend: The ART OF COOKERY Made Plain and Easy by Mrs. Glasse (a new edition published in Alexandria in 1805).   While Mrs. Glasse did not lay out the settings, she did include”Bills of Fare” for each month of the year.  December’s menu included three courses, again with no vegetable suggestions, except for mushrooms.  One dish in the third course did catch my eye…  Ragooed Palates.  What, I asked myself, could that be?  Surely not what it seems.

Yes, dear reader, it is exactly what it says.    The palate is, of course, the roof of the ox’s (or cow’s) mouth.   It was apparently considered a form of offal, like kidneys or tripes, and required extra preparation involving blanching and skinning and so forth.   I also learned that a “ragoo” or “ragout” is, essentially a stew, so possibly Mrs. Glasse’s Stewed Palates may have been served as Ragooed Palates for a December dinner.   Fricassee also seems to be very similar to a stew.  Both involve long cooking and a rich, heavily seasoned gravy.

Mrs. Smith’s fricassee of Ox-Palates included stewing beef, salt, pepper, onion, eschalot (shallot?), anchovies,  and horseradish to make the gravy: then she stewed the palates until tender, cutting them up, and putting them aside.  Then she cut up chickens, seasoned them with nutmeg, salt and thyme and fried them with butter.   The palates were peeled and cut up, then were combined with the chicken in half of the gravy and stewed.  While the stew was cooking, the rest of the gravy was put in a pan, thickened with egg yolks, white wine added with butter and cream.  When ready to serve, the gravy in the pan was blended into the stewed palates and chickens.  When dished up, a garnish of pickled grapes was recommended.  When all is said and done, this sounds like it could be delicious!  (Please remember that this is one dish of several in a course.)

Both cookbooks contain instructions for vegetables, including broccoli, cabbage, carrots and (of course!) parsnips.  I feel confident that, season permitting, some sort of vegetable dish would have been included.   However, it is interesting to see how heavily the winter menu relied on meat dishes.  It is also a timely reminder that little was wasted in those days.  Somehow, I can see Jane Austen (or the heroine in my work-in-progress!)  sitting down to a festive Christmas dinner of turkey, possibly some parsnips, a Fricasee of Ox-Palates, and a boiled pudding, with great enjoyment.

Well, here we are, exactly two weeks before Christmas.  It seems like I just undecorated and put everything a couple of months ago.  Time passes way too fast…but enough about that.  This time of year is a beautiful time, full of major celebrations, of which Christmas and Hanukkah are only two.  My particular celebration is Christmas, but those of you who don’t celebrate Christmas may have a similar situation involving other holiday traditions.  Everyone is very busy decorating, shopping for gifts, sending cards or letters, cooking and baking, and otherwise preparing for their own special traditions and celebrations.    All of these activities are going on at the same time we continue to live our regular routine, work, writing, researching, family, and so forth.  We try so hard to make it all perfect…  Which leads us directly to the all-to-common Christmas meltdown.  This year, I am determined NOT to experience one.

I have put up my tree and some decorations.  Being a woman of a certain age (don’t you love that phrase?),  I have lots of decorations that have been accumulated over years and years.  Many memories are involved.  Have I dragged them all out and made careful choices?  No, I have not.  I have put up what came to hand first, and stopped when I felt that it was time.  The tree is in the library corner, just like it was last year, and looks very similar.  (The picture shown  is last year’s tree.  I haven’t gotten around to taking pictures yet.)

Our Christmas card list and cards are waiting on the dining room table.  We will get them out.   My husband and I have already received a number of lovely cards, and a few newsletters, and we are so glad to hear from dear ones at this time of year.  I have at least sent the e-cards to friends and family on-line.  Gifts?  Some shopping is done, some still in process.  I’ve even had a couple sent.   Giving back to my community is also on the agenda.  A new feeling this year-I don’t feel guilty for not having my mailings done at the time I had so hopefully planned.

This year, I am going to take full advantage of the 12 days of Christmas.  (Not that this is new…  My nearest and dearest usually get cards and packages on a flexible calendar.)  The difference this year is that I refuse to get stressed and upset about it.  It is more important to relax, enjoy the season and the opportunity to share with our loved ones and others.  Getting upset about things only ruins the time you have, it doesn’t make anything happen differently or go more smoothly.   Surely it’s more important to be able to enjoy the time you have with the people you love than it is to have ticked every item off your list on schedule even if it burnt you to the socket.  We are too hard on ourselves.  It’s time to put the focus where it belongs: the meaning of the holiday we celebrate, and the joy of being with those we love.