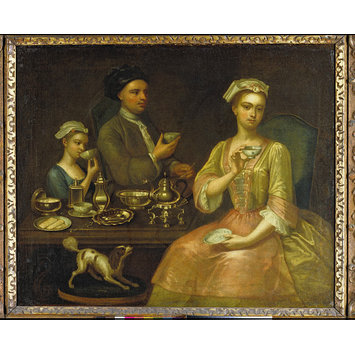 One of the pleasures of reading history, whether fiction or non-fiction, is learning about the day-to-day living of people in the past.  I am particularly interested in the Georgian era in England, especially the Regency period.  Recently, I was reading a novel, in which a menu for a particular meal was detailed and “a pupton of cherries” caught my attention.  It sounded like some kind of sweet dish, and I wondered what was in it, so I tried to look it up.  Not as easy as I expected!

First of all, I could not find a definition of “pupton.”  Thanks to the miracle of Google books, I found several old cookbooks on-line.  In THE ART OF COOKERY by John Mollard (4th edition published in 1836), I found arecipe for a “Pulpton of Apples” (p. 251) in which quartered apples were stewed until tender, sieved, and mixed with spices, eggs, and breadcrumbs soaked in cream.  This concoction was baked in a buttered mould and served turned out on a dish with sifted sugar over it.   A recipe for a pulpton of apples also appears in the 1802 edition of Mr. Mollard’s cookbook.

Hannah Glasse, whose popular cookbook THE ART OF COOKERY Made Plain and Easy was first published in 1747, and was released in numerous editions until the last in 1843, includes a recipe for a “pupton” of apples as well.  In her version, the fruit was cooked with sugar and only a small amount of water, until the fruit was the consistency of marmalade.  She also combined the cooked fruit pulp with eggs, spices, cream and breadcrumbs, with some butter, baked it and served it on a plate.

Both of these recipes sounded good to me, and I could see how this recipe could be adapted to almost any kind of fruit, including cherries.  However, this was not the end of the pupton! Looking over the tables of contents, I found recipes for savory puptons as well.  These sound remarkably like pate’s and terrines served today, as at least a portion of the fish, meat or poultry component is cut finely with equal portions of suet, then pounded into a paste, called forcemeat.  If used alone, the paste would be seasoned, then it could be rolled into balls and poached in a sauce or fried; it could be put into a bag of some kind (one recipe I found took a chicken, removed all the meat, made the paste, seasoned it, and put it back in the chicken skin) and stewed, or baked.  A fascinating recipe I found in THE LONDON ART OF COOKERY And Housekeepers Complete Assistant by John Farley (4th edition, published in 1787) included a “French Pupton of Pigeons” on page 127.  This recipe took a quantity of forcemeat, made a very thin layer (similar to a pie crust), and then proceeded to layer thin bacon, squabs, asparagus, mushrooms and several other ingredients (a few of which may seem odd in combination today, including cocks’ combs).  This was then topped with another thin layer of forcemeat, like a pie, and baked.  When done, it was to be served in a dish with gravy poured around it.

Either sweet or savory, the pupton sounds like a wonderful and tasty dish!  I love this kind of detail, as it makes the people of the past come alive.   Food is something we all have in common.