One of the blessings of living in south Florida is having the ability to grow fruit at home.  Right now, I have fresh pineapple in my refrigerator, another one ripe and ready to cut, and a third that is almost there.  From two that ripened earlier, I have two more plants started in pots that will be ready to plant in a few weeks.  There is nothing more delicious than fresh, sweet pineapple, and it’s even better when you can pick it in your own garden!  Near some of the pineapple plants is a lemon tree, which is covered with lemons ripening, as well as flowers.  The variety of lemon is Eureka, which produces a small yet powerful lemon, and which blooms and fruits with astonishing frequency.

The taste for pineapple and citrus is by no means a modern taste.    Explorers were bringing specimens of exotic plants from all over the world during the age of exploration.  Portuguese explorers are credited with bringing sweet orange trees back from the orient to the Mediterranean area about 1500, although the Persian orange (which is bitter) was known in Italy as early as 1100.  Orange trees became a popular plant widely sought for terraces and formal gardens in France, Italy, Germany and England, and needed special protection from the northern climates.  Buildings called “orangeries” were constructed in France in the 17th century at Versailles and other sites..  At Kew Gardens in England, an orangery was built in 1761 by Sir William Chambers, which was the largest glass house in England at that time. 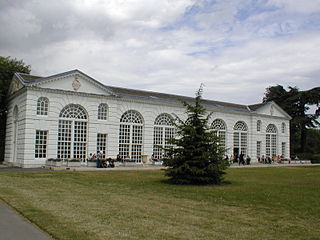 A beautiful conservatory was also built for Carlton House by Thomas Hopper in 1807.  As you can see, these were restricted to royalty, the aristocracy and the very rich because of the price of glass, and taxes on glass.  Conservatories and orangeries at that time could be free-standing buildings, or glassed rooms attached to a stately home.  Because of cost, for all but the wealthiest, these structures did not contain nearly as much glass as a greenhouse would contain today.  Roofs were frequently solid (although possibly removable) or inset with only a glass panel, and the walls were more solid, inset with larger windows.  During the Regency era, the garden room was increasingly popular, as a transition from interior to exterior space.  The conservatory reached its hey-day in the Victorian era.

The pineapple was introduced after Christopher Columbus first encountered it in 1493, and became hugely fashionable to display and enjoy for dinners by 18th century royalty and aristocracy.  This craze filtered down to the gentry.  However, the pineapple had certain special issues for cultivation: as a tropical fruit, it was not sufficient to protect them from frost; they also required more light than orange trees and most other exotics and a source of heat.  Pineapple cultivation was originally successful in the Netherlands, and English gardeners went to study the methods used there.

Heating was a real challenge.  Conservatories and orangeries were built facing south, to maximize exposure.  Angled glass was used to catch morning and afternoon sun, while deflecting the intensity of the mid-day sun.  However, pineapples required more warmth.  Early attempts with furnaces were not successful as fumes were toxic to the plants.  Hot air flues built into the walls were more successful, but the furnaces required constant attention and fires frequently broke out due to the build-up of soot and other material in the flues.  One solution was putting the potted plants into pits which were filled with a source of heat.  One substance used in these pits was manure, which generated heat but too intensely initially and then cooled too rapidly.  Oak bark in water resulted in a fermentation process which released heat at a slow and steady rate and allowed for more success.  Because of the special needs of the pineapple, a pinery could be located in an orangerie or conservatory, with a door allowing it to be closed off, or in a completely separate structure.

I  became interested in pineries because one appears in my work in progress (as well as the fact that I have pineapple plants myself!).  Although the term “pinery” is sometimes considered virtually interchangeable with “conservatory” and “orangery”, they are not in fact identical structures, although all are forerunners of the modern greenhouse.   The idea of a special structure in which to grow plants that require protection from cold weather  has existed for centuries.  The Roman emperor Tiberius had a “specularium” designed specifically to grow cucumbers out of season, with windows created from fragments of mica.  In France, records indicate a south-facing glass structure existed as early as 1385.

I also recommend M. M. Bennetts’ excellent article, The must-have garden accessories for the rich and richer? A glasshouse and pineapples!, posted April 26, 2012 in the English Historical Fiction Authors blog at http://englishhistoryauthors.blogspot.com/2012/04/must-have-garden-accessories-for-rich.html

6 Replies to “A Taste for Pineapple…”